If you save calories, you won’t gain weight, but if a meal contains only a few calories, then it doesn’t taste like anything. Right? Only to a limited extent, even if these statements reflect popular opinions on the subject of calories and low-calorie cooking.

So the first question that arises is: what are the calories all about? Colloquially, the nutritional information in kilocalories is simply referred to as “calories”. It is about the energy content or calorific value of food. Put simply, there is a thermal unit behind it.

The bottom line: There are “good” and rather “bad” ones. Because not all the calories we eat every day are harmful and make you fat. What is important is how well the body can use them, that is to say “burn them off”.

It should not be forgotten that the energy requirement varies from person to person – and is also subject to fluctuations (e.g. physical strain, illness).

As a rule of thumb, one could say that low-calorie cuisine simply makes sensible use of natural resources and alternatives.

Many products can be replaced by low-fat and lower-calorie variants without sacrificing diversity. The main aim is to replace animal fats with vegetable fats, as their polyunsaturated fatty acids are healthier.

It doesn’t always have to be fried, breading quickly soaks up with fat. As a light alternative, it should be marinated much more often.

Side dishes can also be prepared very easily and conveniently in the oven – this is how fried potatoes become really crispy and tasty in the oven.

Tip: After frying in the pan, let excess fat drip off on paper towels.

Low-fat meats ensure that calories are saved. In the case of poultry, the skin should be removed before preparation. 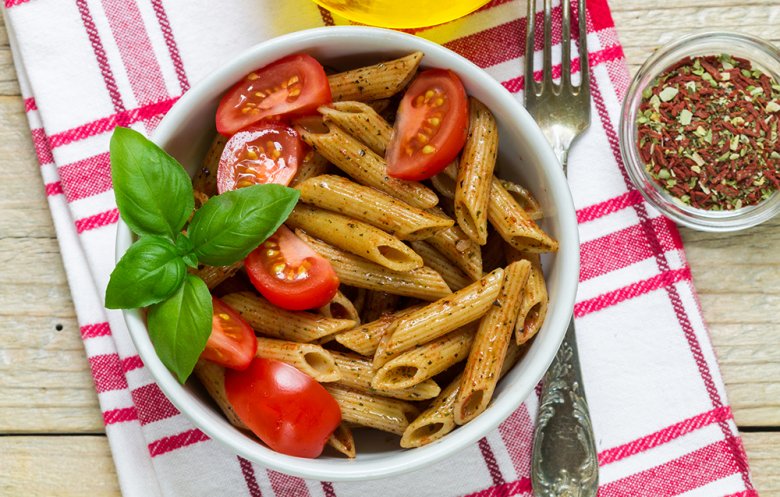 Whole grain products should be preferred instead of white flour products. (Photo by: La_vanda / Depositphotos)

This is how low-calorie cuisine works

But even in very practical everyday cooking there are tricks and tricks to make dishes “lighter”:

Tip: A wok or a steamer is advantageous because it is especially useful for cooking vegetables and meat in a calorie-conscious way. The microwave is also suitable for this. And a well-coated Teflon pan also saves a few drops of frying fat.

Our recipe tips for low-calorie enjoyment: