The name “blanch” arose because meat turns white on the surface when it is scalded. As a rule, the blanched vegetables are then quenched with ice-cold water. Then it can either be frozen or otherwise processed.

With this cooking method, you get a large part of the vitamins and minerals that would be destroyed during the entire cooking process. Especially heat-sensitive vitamins such as vitamin C are retained in their effectiveness through blanching.

Many vegetables also retain their beautiful, rich color through blanching, which is usually completely lost when cooked through. Hard vegetables such as cabbage become softer and more digestible.

As a result of the cooking process, many varieties take on a grayish sheen and look less appetizing. Those who want to decorate vegetables and cook especially for the eye, i.e. for guests, usually use the blanching method.

To maintain the color, add a little salt, lemon juice or vinegar to the blanching water. The blanching time varies depending on how it is processed later: if you want to freeze, 3 minutes is enough, and pre-cooking usually takes 4 to 5 minutes.

Sensitive vegetables like spinach leaves only need to be immersed in boiling water for a few seconds. These are then even cooked and can be consumed.

The ideal preparation for freezing

Today, vegetables and mushrooms are blanched mainly because they want to deactivate enzymes. Because they are responsible for undesirable color changes such as browning or for the development of unpalatable aromas. One would like to prevent that.

In addition, the process causes oxygen to be driven out of the vegetables, which loosens the cell structure of the plants, making them softer and more digestible. The process also reduces the formation of germs and destroys undesirable flavors and toxins.

This is how you blanch properly 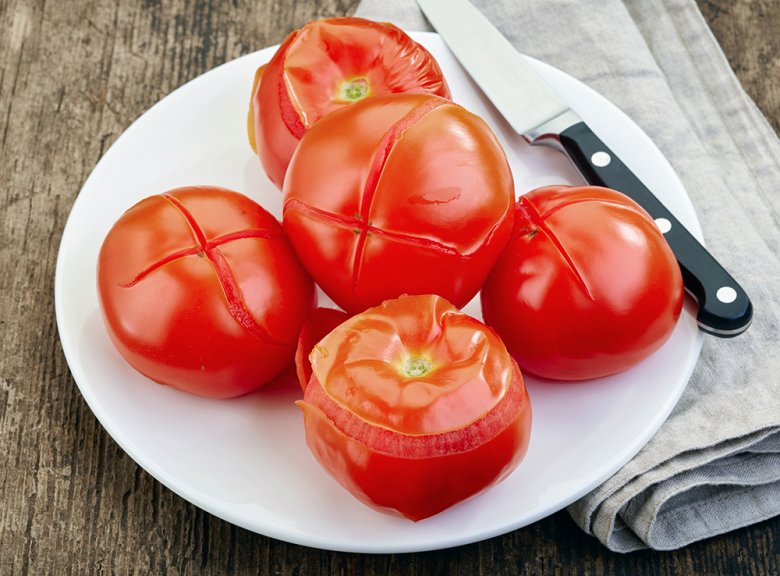 Tomatoes are blanched so that they can be peeled more easily. (Photo by: magone / Depositphotos)

Tomatoes, for example, are easier to peel after blanching. Blanched vegetables should be deterred with ice water, as this will keep them beautiful in color, structure and taste.

The method has established itself for deep-freezing vegetables. By blanching you get the vitamins, but also the beautiful color of the vegetables.

To blanch 500 grams of vegetables, you need about 5 liters of salted water. For blanching, put the cleaned vegetables in bite-sized pieces in a pot with plenty of bubbly boiling water. After a few minutes you can take it out with a slotted trowel and then quench it with ice water.

Immediately afterwards, it can be processed further, i.e. usually frozen. Since the cooking water can contain flushed-out nitrates, it should not be used any longer.

Low-calorie cooking: tips and useful information for practical use