The different types of steak: the best meat

There are many different types of steaks. Basically, a steak is a Cut of beef. The following types of steak are suitable for roasting:

These differ in their individual and character characteristics, which is why not every type of steak tastes identical and should not be prepared in the same way.

The fillet steak is cut from the internal loin muscles of the beef. Its very fine fibers and relatively low fat content make it special tender in its consistency and taste. Therefore it is the noblest, but also at the same time most expensive steak.

Different types of steak are cut from the fillet, such as the châteaubriand or the tornedo (medallion), which consists of the narrow end of the fillet piece.

Since the fillet steak has very fine fibers, it should not too hot and fried too long will.

The châteaubriand (double loin steak) is basically one double fillet steakwhat is cut from the thickest part of the fillet.

Due to its fine marbling, it is very juicy, but extremely tender.

The same applies to the roast as to the fillet steak.

The entrecôte is cut from the rib and is one of the rather more flavorful Steak types. It gets its unmistakable taste from its increased fat content, which serves as a flavor carrier.

Since the entrecote tends to become tough quickly, it will seared only briefly on both sides.

The roast beef is also made from the rib and is divided into two parts.
The front part is used for the roast beef (beiried), the rump steak and the sirloin steak.

Ideally, it is fried medium so that it retains its tenderness, juiciness and its own delicate taste.

The rear part is used for T-bone steaks and porterhouse steaks.

The T-Bone Steak owes its name to the T-shaped bone that separates the two pieces of meat. It consists of about 2/3 roast beef and about 1/3 fillet.

The bone makes for a very strong taste when frying. T-bone steaks are about seven centimeters thick and weigh up to one kilogram, but still have a relatively short cooking time because they contain very little connective tissue.

When frying, the fillet side should be fried a little shorter than the roast beef side.

The porterhouse steak is basically a T-bone steak with the difference that the fillet part is higher than the roast beef, which is why it is slightly more expensive than the T-bone steak and is cut a little thinner.

Here, too, the T-shaped bone serves as a flavor carrier. Porterhouse steaks are a bit stronger in taste and also have a very short cooking time due to the low proportion of connective tissue.

The rump steak is firm and well-marbled meat that is cut from the back of the roast beef.

Characteristic here is a thin fat rim, which is responsible for the very strong taste. Rump steaks are ideally also fried medium.

The sirloin steak is a rather lean steak from the back roast beef.

The Rib-Eye Steak owes its name to the characteristic fat eye, which ensures a special juiciness and the incomparable taste.

It is cut from the prime rib, which is why it has a high degree of marbling.

The hip steak is, as you can already guess, cut from the hip (flower) and is the cheapest type of steak.

Due to its marbling, it has a particularly intense taste, but similarly lean as the fillet steak.

Since hip steaks tend to dry out quickly, they should be seared quickly and hot so that they stay nice and juicy.

An overview of the various steak cooking levels 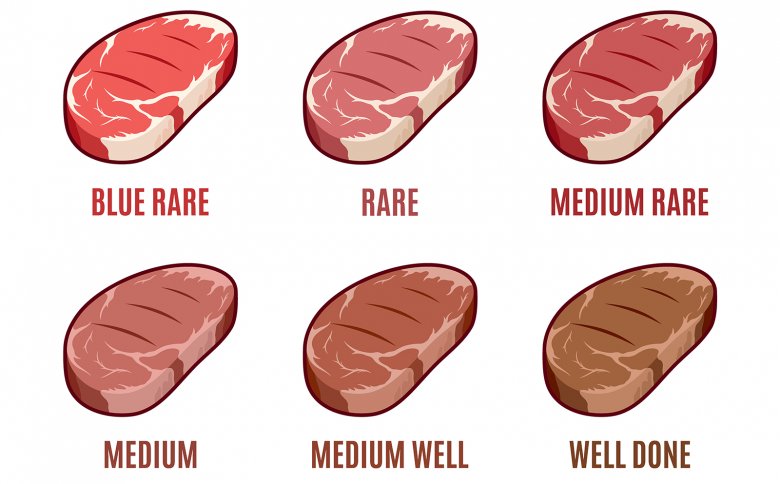 The different cooking levels must be taken into account when preparing steaks. (Photo by: Counterfeit / Depositphotos)

The different cooking levels are: 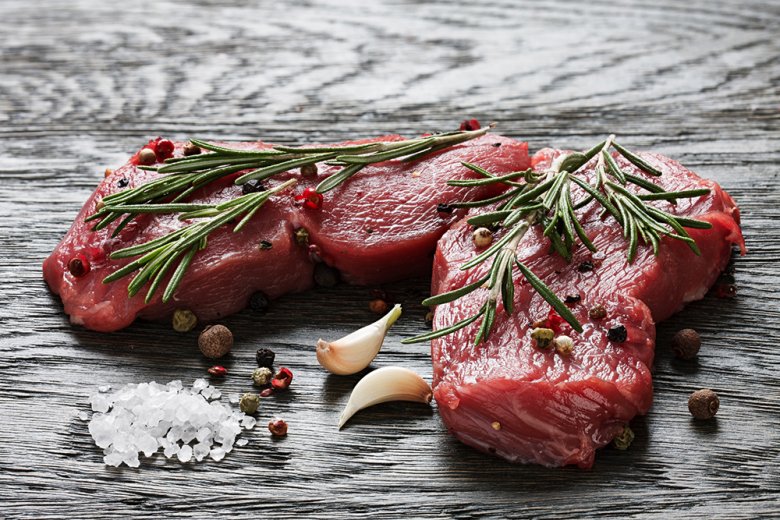 The steak should only be seasoned after roasting. (Photo by: kobeza / Depositphotos)

How to cook steaks correctly: how do I cook a steak correctly?

First heat the pan (preferably a stainless steel pan or cast iron grill pan) without adding fat or oil to a medium setting, wait about 3 minutes and then test with water whether the correct temperature (180 degrees) has been reached. To do this, simply squirt a few drops of cold water into the heated pan with your fingers. As soon as the drops “dance” in a pearl shape, the pan can be rubbed out with kitchen paper and the oil or fat added.

Now put the steak in the pan, press down briefly with a spatula and fry depending on the desired cooking level. The meat may only be turned when it can be easily removed from the pan.

Cooking times: how long do I have to cook a steak?

Depending on the desired cooking level, a steak with a height of around 2 centimeters as follows:

Add one minute of cooking time for each additional centimeter for each side of meat.

As an alternative to the meat thermometer, a test with the spatula or with your thumb can reveal how well done the meat is.

To do this, simply apply light pressure on the meat:

Finish cooking the steak in the oven

Alternatively, the meat can be cooked to the end in the oven after searing it briefly. To do this, place an ovenproof pan in the oven preheated to 150 degrees and, depending on the preferred cooking level, finish frying.

For the perfect steak, in addition to the correct roasting, resting time is also essential. To do this, wrap the steak in aluminum foil before serving and let it rest for at least 1-2 minutes (5 minutes are better). This allows the meat juice to spread properly.

In which oil should the steak be fried?

Butter and olive oil are less suitable for frying steaks.

When should you salt and season the steak?

The meat should never before frying Salted and seasoned because salt would remove the meat juice and pepper would burn. It is better to salt and pepper the meat shortly before the end of the roasting time.

Grilling steaks – that’s how it works

To do this, preheat a good portion of coals, then let the grill and grate heat up for about ten minutes and then sear the steak on one side. Turn after half a minute and fry on the second side. Repeat this process until the meat has reached the preferred browning.

Then cover the steak on the grill (kettle grill) away from the coals. The temperature should not exceed 100 degrees. Alternatively, the steak can be steeped in the oven at 80 degrees until the desired core temperature is reached. More tips on how to properly grill steaks can be found here: Grilling steak

Very thin steaks are particularly suitable for grilling. The best types of steak for grilling are:

Serve the steak on preheated plates.

Some behaviors should be avoided at all costs:

The side dishes for steak 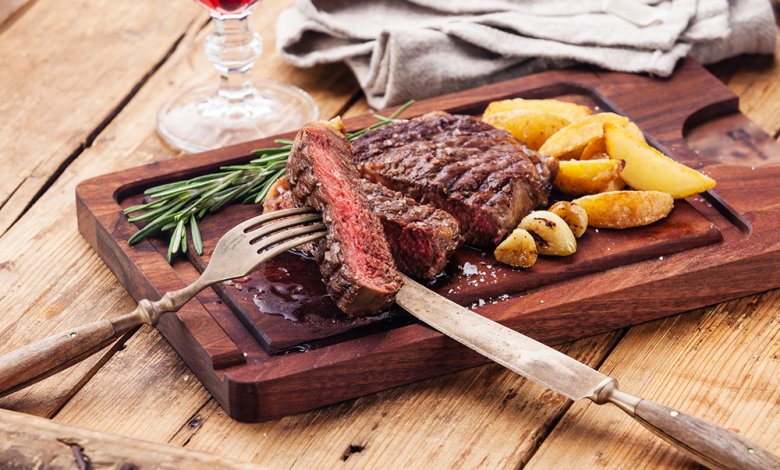 When roasting steaks, these should be in the foreground, opulent side dishes are not necessary, but rather a few light variants.

For example, mushrooms can simply be fried in the pan. Finely chopped onion rings are also suitable for frying, then simply pour red wine over them, stir in the cream and simmer briefly – a great sauce is ready.

Alternatively, the steak can be served with a delicious salad, a variety of potatoes and / or herb butter baguette. For example, baked potatoes with sour cream also go well with steak.